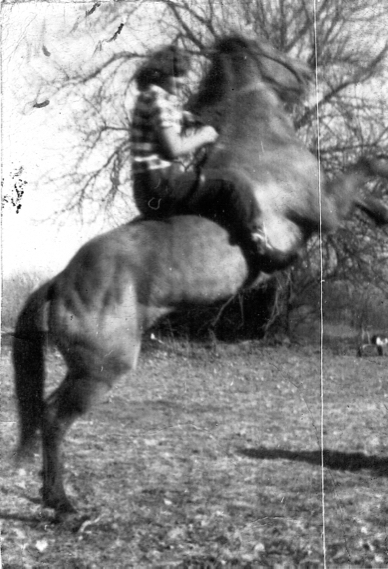 In the photo, an exultant young woman sits astride a rearing horse. Even without a saddle, she looks as comfortable as if she were in a rocking chair. That young woman, Clara, wears her first pair of cowboy boots, while beloved Queen, displays her own splendor. Together, the horse, sleek and strong, and the rider, young and happy, conjure an air of freedom, of possibility—and unity.

The photographer beautifully captured this exuberant moment in Clara’s life. And it’s no surprise that he did, when you know who he was. Albert Lamoreaux, whom everyone called Jack, was a farmer and hired hand, his family close to the Reida family. He knew Clara well. After Clara’s father died at a young age, Jack helped father her. And when she went off to college, Jack and Bud Riggs took care of Queen.

Clara was intent on keeping her beloved horse, no matter what. She remembered all too well the time her mother noticed that she hadn’t been riding Queen and was considering selling her. True, Clara hadn’t riding Queen, and it was because of Queen’s tendency to rear up and fall over backwards, endangering the rider. But the thought of losing Queen threw her into a fit.
She went around asking everybody she could think of how to break a horse from rearing like that. One way she learned about was this: when the horse rears, break a bottle of water between its ears. The horse thinks the water is blood and will stop the unwanted behavior.

One day, when Clara was out riding, Queen decided to rear. Clara didn’t have a bottle of water, but she did have her toy gun.* She took the gun out and hit Queen as hard as she could between the ears, breaking her prized toy to smithereens. But it did the trick in breaking Queen from that habit. After that incident, Queen wouldn’t rear, if Clara was riding her, unless Clara cued her to do so.

Of the many cousins and others Clara warned not to get on Queen, cousin Junior was the one who didn’t heed her advice. In Clara’s words, “Of course, Junior didn’t listen to me, and one day he got smashed.” Junior learned that Queen was most definitely Clara’s horse.

The photo Jack took captured the spirit of that horse and rider because he knew both so well. Clara says that she grew up with Jack’s daughter, Bonnie, the two of them riding horses, going to church, doing everything together. But to do all that, they had to overcome at least one obstacle. Clara called that obstacle “the green-eyed monster.” In short, Clara was jealous of Bonnie. Everybody called Bonnie “Jack’s girl,” even Jack. Bonnie was slightly younger, and Clara thought she came along just in time to get all the attention.

But those who know Clara aren’t surprised that Clara overcame that jealousy, moving past it to develop a life-long friendship. And they’re not surprised either by the fact that Clara wanted Jack to be acknowledged for taking that picture. But mostly she wanted him to be acknowledged for the central role he played in her life, and at times she most needed it. It’s something she’ll never forget.